We arrived at our little apartment in the Old Town in Split at 7 pm after a long and exhausting bus ride from Zagreb.  We had spent the previous 27 hours in transit and we were beat.  We had booked a studio apartment from a girl named Ana on Air BnB for $34 a night.  It was tiny but we were only there for two nights and we certainly don’t mind tiny.  When she met us, she told us that the internet wasn’t working very well and because she had another apartment available (and it was bigger), we were welcome to stay there instead.  It was only a few streets down from the first one.  We moved our stuff into the bigger place, refreshed ourselves and set out again to see what the nightlife was like in Split.

We didn’t have great expectations since it was 8:30 pm on a Monday night but the main promenade was bustling with activity! There were Christmas lights everywhere, small kiosks lining the seaside, selling hot wine, beer, small timbit-like donuts smothered in icing sugar and chocolate sauce, lattes, and souvenirs and gifts in the form of Christmas ornaments and fish parts pickled in glass jars.  We even saw someone walking down the street with an entire pig (dead), wrapped in Saran Wrap, most likely for Christmas dinner.   We had a hot wine (like a warm, spiced wine)and sat near the water (there were no other seats available) and sipped our wine while listening to cheesy Christmas anthems (Do They Know It’s Christmas, All I Want for Christmas, etc.) and reflecting on the day’s events.  We headed home after walking around the Diocletian Palace for a few minutes and settled in for a very long and much-needed sleep.

The next morning, we were shocked to find that we had slept almost 10 hours and had to drag ourselves out of bed at 9:30 am.  We had bought some basic groceries from the nearby market the day before and we had an easy breakfast of sliced salami, cheese, fruit and tomatoes.  Our first order of business, after showers, was finding coffee.  My head was splitting and I didn’t fully realize why until I counted the hours – 48! – since my last coffee.  No wonder!!

We got our first coffee on the promenade and then decided to wander through the Diocletian Palace, where we found a small arts and craft market and another café (cafés are everywhere in fact).  We stopped for another latte and to write in my journal, reflecting on some of the thoughts I’d had about my first visit to the Balkans.

After fully caffeinating myself, we wandered around the Palace, checking out the market stalls and the high-end stores.  The Diocletian Palace was built in the 3rd century as the retirement palace of the Roman emperor Diocletian. After being sacked by barbarian tribes centuries later, those vast imperial residences were split into modest living quarters and shops.  Now, the streets within these old stone walls are a mix of modern, rebuilt storefronts and crumbling ruins.

Since Bob and I are fans of the show Game of Thrones, we remembered that there was a place within these old stone walls that was used as a location to film an episode.  The reference was to the Ethnographic Museum.  We asked the lady at the front desk after we had paid our 30 HRK (approx. $6) and she said that the locale we had a photo of was familiar but was definitely not in the Ethnographic Museum.  Since we had already paid our whopping entrance fee, we decided to go ahead in and it was a very small but beautiful museum of the traditional clothing and furniture of the early Croatians.  The best part of this museum, and the part that was worth the entrance fee alone, was the Vestibul Terrace.  We climbed a narrow, ancient, stone staircase around and around and around until we came out on the roof of the museum, with a 360 degree view of Split.  It was incredible!  And we were the only ones there!  (Of course, we’re probably the only tourists in Split at this time of year…)

At this point, I was getting hungry so we found a place that looked authentic Croatian but still had some English on their menu.  (Having food allergies doesn’t allow me to be too adventurous in my food choices.)  We chose a restaurant with the uninspiring name of the No Stress Bistro.  Yet their food was spectacular!  It is local, organic, the bread is baked in-house and they’ve even branded some of their own wines.  We ordered the cheese and meat plate, cabbage rolls for Bob and sausage and cabbage for myself along with a bottle of their wine (which was the most expensive part of the meal at 160HRK ($32)) and the total, including tip, was $60.  I love cheap destinations!! 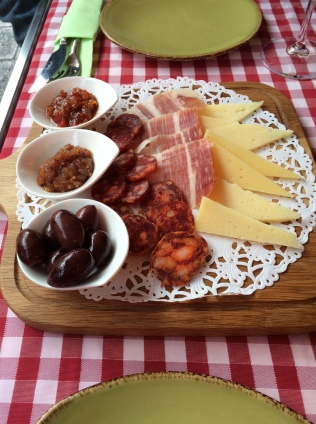 After relaxing for quite some time at the restaurant with that lovely bottle of wine, we headed to a park that Bob knew from his time here before.  He had leave there during his tours in Bosnia and we revisited some of the spots that were important to him.  These included a park with a massive statue that was split into three and thrown in the harbour to deny the Nazis the brass for artillery during WW2.  This statue is again in one piece and if you rub the big toe, it is supposed to bring you good luck. 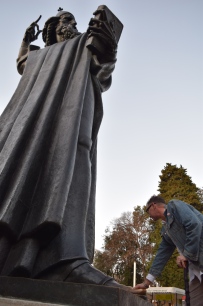 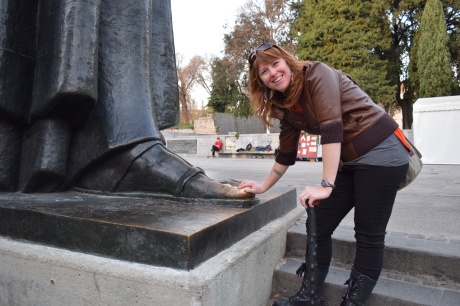 There is also a silver maple tree there that he sat on, while on leave, reflecting on his time in the war-ravaged republic of Bosnia.  He found it again and took a seat for a moment. 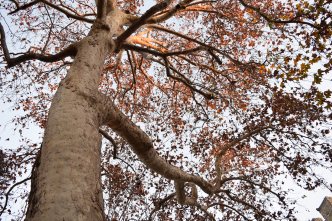 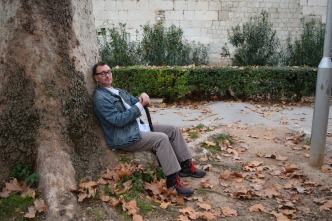 After that, we headed back to the apartment for some downtime.  It was approximately 5 pm but we certainly weren’t hungry after the massive lunch so we’d had.  I wrote some more and we just chilled for a while.  My stomach started hurting, which isn’t unusually considering my sensitive digestive system and while I wasn’t convinced I wanted to eat anything, I thought that walking around would definitely make me feel better, or at least take my mind off of it.  So we headed back to the promenade and the palace to just people watch and window shop.

After about an hour, I started to feel better.  In fact, I started to feel hungry again.  We decided we would look for a restaurant that our Air BnB hostess, Ana, had recommended.  We wandered down dark side streets, off the beaten track and wondered where the hell we were going (streets here are more like very narrow alleyways!) and eventually we saw lights strung around a terrace.  We approached it and sure enough, it was the restaurant!  But there were no menus outside and the door to the interior was a solid wood door.  So we stood, for a moment, outside wondering if this was in fact a restaurant or a person’s house.  Bob was brave enough to open the door and yes, it was the restaurant.  Phew!  We were given a corner seat in a small, romantically lit restaurant that would sit only 30 people tops, and we ordered soup, salad, a steak entrée and mushroom risotto and again, a lovely bottle of wine for a total of $50 (including 20% tip.) 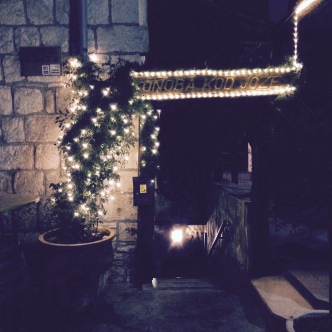 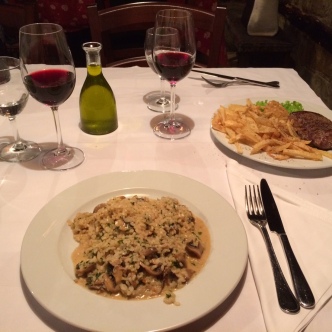 Our dinner for the evening. Delish! 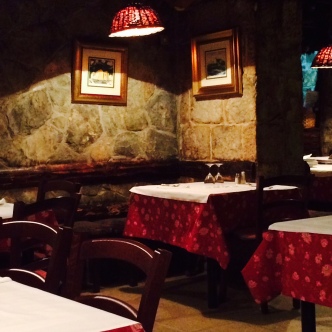 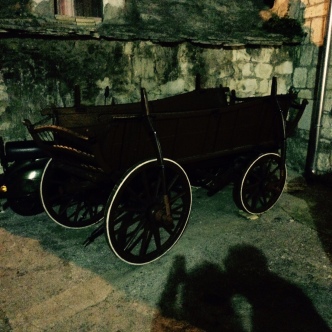 There was an old wagon outside. No significance, I just liked this shot.

What a day!  We were sufficiently full and exhausted!  Still getting our bodies used to the time change, we were feeling awake and asleep at odd times.  It was only a few minutes walk back to the apartment (everything in Split is only a few minutes away!) but by the time we actually got into bed, it was around midnight.

One thought on “Split, Croatia”