Look at this place.  It’s enchanting, isn’t it?

This is Mostar.  A small city of just over 100 000 people in Bosnia and Herzegovina. If you are researching places to go and things to see in Bosnia, this will definitely pop up on your radar.

It’s known for its Stari Most (Old Bridge), hence its name Mostar.  This city was first developed by the Ottomans in the 15th and 16th centuries and later by the Austro-Hungarians in the 18th and 19th centuries.  There is a diverse mix of architectural features in the town and in the bridge itself, making it a symbol of multiculturalism.  During the war in the 1990’s, the bridge and most of the town was destroyed.  Which is a tragic thing to happen, of course, but having been to this beautiful city, it breaks my heart to think of the carnage and destruction that war brought upon these sites of such great historical and sentimental value and the chaos rained upon its civilians.  After the beauty and resort-like feel of Croatia and the ease and joy of life in Montenegro, as soon as you find yourself in Mostar, the darkness and resilience of the human condition puts this city and country in a completely different category.  Bosnia and Herzegovina is a country for travellers, not tourists.  This country will change you.

The story of the whole town is heartbreaking.  For centuries, everyone had gotten along peacefully; they had lived their lives as neighbours.  Then, after the death of Tito, the rise of nationalism started to rear its ugly head.  Mostar has a river running through it and the Western side is mostly Bosnian Croats.  The Eastern side is mostly Bosnian Muslims (Bosniaks).  They fought each other, one side even besieged the other, and the Eastern side was harder hit.  The bridge had stood for 427 years until it was destroyed in November 1993 during the siege (the siege ended just a month and a half later).  The Bosnian Croat side had shelled it 6o times before it crumbled.  While the Croats said that destroying the bridge was of strategic value, academics have argued that it was to destroy the symbol of multicultural cooperation.

The Old Bridge during the war. (Photo credit unknown)

A cable bridge is put in the Old Bridge’s place. (Photo credit unknown)

An absolutely beautiful reconstruction of the original Stari Most.

A cable bridge was erected in its place after the war and in 2004, construction was completed on the new Old Bridge.  It was rebuilt with cooperation from UNESCO, using authentic materials and construction methods.  On the UNESCO site it says:

I love that last sentence.  Read it again.  “The reconstruction of the fabric of the bridge should be seen as the background to the restoration of the intangible dimensions of the property.”  A sign of reconciliation.  Though, after learning so much about this war, I don’t know how the Bosnian people could reconcile.  It seems they have but in Mostar, there are carved stone signs that sit on the ground in discreet corners that say, “Don’t Forget” in English.   I wonder if these signs are so that it never happens again, or are a reminder of who did it.

The city now is absolutely beautiful.  The Eastern side still shows many signs of the war, even after so many years.  The Western side has fared much better.  But the Western side is Bosnian Croat and so they have received money from their richer kin to the west, Croatia, to rebuild.

The river still divides the city politically as well.  After the war, according to the constitution of the newly-established independent country of Bosnia and Herzegovina, there are to be three (yes, 3) elected officials – one from each ethnic group Bosniak, Croat and Serb – sitting in office at all times.  Each one is in charge for eight months at a time and for any decision to get passed, all three need to agree.  (So, you guessed it, nothing ever gets done.)   This means that those who live on the Eastern side vote for one president of several Bosniak candidates and those on the Western side vote for a different president from Croat candidates.  Confused yet?

So that’s a very, very, basic history of the town.

When we arrived at 1 pm, Jacques was dropped off at his hostel.  The hostel let us leave our suitcases at their place for a few hours as we weren’t staying the night.  Our bus to Sarajevo was at 6:30 pm.  Very gracious of them!

After buying our ticket to Sarajevo for 19KM (about $15), the three of us headed off to see what there was to see.   In all honesty, the Old Town is very small.  As we walked, we noticed buildings with bullet holes, a lovely pedestrian shopping street, lined with cafes and small boutiques and several mosques.   We hit the Old Town and the road turned from asphalt to pebbles, arranged and grouted in patterns, and so smooth they were like glass.  If you decide to go to Mostar, wear good shoes or you will completely wipe out!  The narrow streets were lined with souvenir vendors, much as I had seen in the muslim quarter of Jerusalem.

More evidence of war in the Eastern side of Mostar. 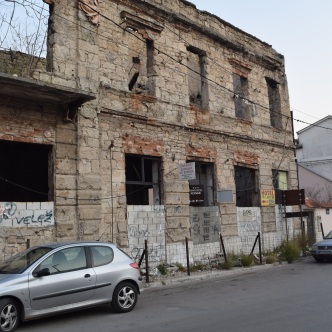 Building on the Eastern side of Mostar. 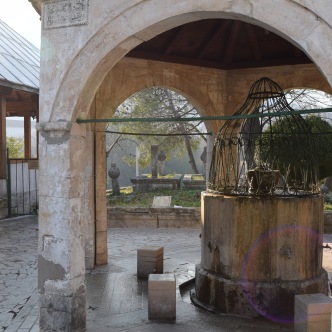 A mosque in the Old Town of Mostar.

The Western side of the river, the Croat side. Notice the streets are made of smooth, round stones. 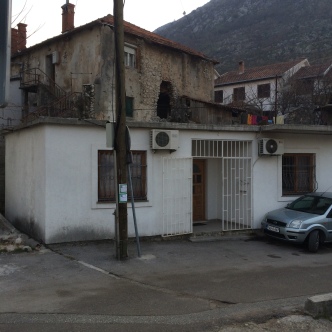 We were getting hungry so we stopped into a restaurant that was on the river and had a spectacular view of the Old Bridge.  Jacques and Bob ordered cevapi (Bob’s third meal of cevapi so far this trip) and I ordered the fish.  It took quite a while to get the food and we wondered if they’d had to go catch the fish before cooking it.  But this is the way in the Balkans.  Nobody is ever in a hurry.  So take note:  don’t start looking for a restaurant if you’re about to fall over from hunger.  Thankfully, we had bought bus tickets on the last bus to Sarajevo so we had enough time to lounge.  We also realized we had already seen most of what to see in Mostar so we were in no rush to leave.

I can’t remember the name of the restaurant that we had lunch at but we sat on the terrace down near the water.

It may not look that good but it was delicious. The probably just caught it.

Over lunch, I told Jacques that I had read somewhere that people jump off the bridge.  He didn’t believe me because the water is really not that deep and it’s filled with rocks so we asked a local who confirmed with a desultory wave of his hand, “Oh, if those idiots want to jump off the bridge, let them!”

After we finished, we set out again to wander.  We came to the Old Bridge.  There were many people having their photo taken on it.  It is really, really beautiful.  It’s hard to explain because in photos it just looks like a regular arched bridge.  But everything in the Old Town looks like it could be from a fairy tale.  Though it may not look it in the photo, it is actually extremely steep to walk on and the stone is, again, very smooth and slippy.  They have smaller “bars” of stone that go across its width that you can use to brace your foot, to prevent yourself from slipping backwards (or forwards on the way down).

We crossed over to the Croat side and continued to wander.  Within a few minutes of wandering, it was clear that we had left the Old Town.  We were back to regular concrete sidewalks and asphalt roads and streetlights and post offices.  We found a pub called the Black Dog Pub and we went in for a drink.  We were the only ones.  There were several rooms in this pub and we found ourselves in the “bar” room (no tables, just the bar) and the ceiling was on its way to being covered by currency from around the world.  We perused the colourful bills and when we couldn’t find a Canadian bill, we gave the barkeep a five dollar bill for his collection.  While he had first seemed a little miffed that we actually made him work when he had been enjoying a day of sitting idly in the corner, smoking and texting, he seemed quite pleased at the contribution.

The bus to Sarajevo didn’t leave until 6:30 pm. We had time to kill so we got a drink at the Black Dog pub.

Bob travelled halfway around the world to find a pub that has a picture of his dog in it. (Well, one just like it.)

Not only did Bob find a picture that looked like his dog, he also found his name on a chalkboard. 🙂

The Old Town of Mostar from the Croat side.

With nothing left to do, we headed back to the hostel to say goodbye to Jacques and to retrieve our bags.

The Crooked Bridge was another bridge that was destroyed in the war and was rebuilt by an historical society from Luxembourg.

Shutters on a building in the Old Town.

We headed to the bus station to await the bus for our final city, the city that sparked this whole crazy adventure in the first place.

One thought on “A Few Hours in Mostar”