This past weekend, my friend and I drove down to the Adirondacks for a landscape photography workshop at the Adirondack Loj.  While we didn’t get a chance to go for a hike due to crappy weather (pouring rain and icy conditions), we found out about the Adirondack Wildlife Refuge from another participant in the workshop.  We looked it up and headed there on Sunday, February 21st.

It’s small and free and a little bit hidden.  But it’s fantastic!  It’s really worth a visit if you have a couple of hours free while in the Wilmington/Lake Placid area.

They are an educational and rehabilitative centre for injured animals.  If you are coming from Lake Placid, you will drive to the Veteran’s Memorial Highway, but instead of going towards Whiteface, turn right onto the 86 and then just over the river, turn right onto Springfield Road.  It will be on your right a few minutes down Springfield (sorry, I can’t be more specific because I was too busy looking for it to notice how far we’d gone).  Once you see the sign, turn down a dirt lane and you will quickly see parking is on the right and the wolf enclosure is directly in front of you.

Last spring, they finished building the wolf enclosure and currently have three Grey Wolves in it.  You can walk around the enclosure and at one part there is a gate to get between the two fences that enclose the wolves.  If you go in here, you can get better photos of them.

We arrived just after 10 am, which is when they open and only missed a few minutes of their Wolf Gathering Talk.  This is when the wolves are most active and the wolf handlers go into the enclosure and play with them, much as I do with my dogs – touching their paws, or gently batting their snouts and ears – and the wolves would interact with the handlers, by instigating tug of war, nudging them with their snouts, and playing with each other.  I’ve never seen a wolf before and they were absolutely amazing.  The whole time, Steve (the man who owns and runs the refuge) talked about the wolves, their habitat, their rehabilitation, their behaviour and the issues that have plagued these beautiful animals. 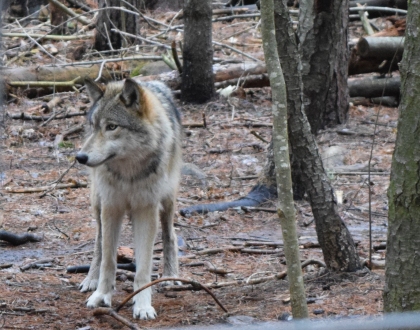 Cree, one of the Grey wolves at the Refuge.

The wolf handlers are seen as part of the pack.

Last spring, this enclosure was finished. It’s bigger than the one they had before and now the wolves only need one walk a day. 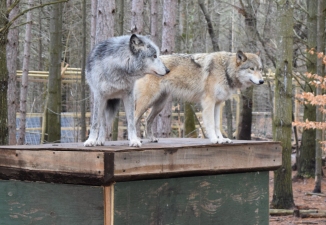 Two of the three wolves at the Adirondack Wildlife Refuge. 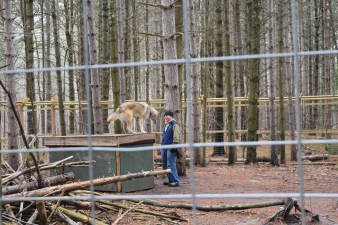 Last spring, they finished construction of the wolf enclosure.

After I had taken about a hundred photos, I walked down the trail through the woods to the other, smaller enclosures.  Each enclosure housed a single species, usually just one or two of each.  There was a Western Coyote, two Bald Eagles, a Red Fox, a Snowy Owl, two Barn Owls and several Barred Owls.  Some I had never seen before – a Silver Fox, a Goshawk and a Bobcat.

According to New York State DEC regulations, they are only allowed to rehabilitate an animal for a month and then they are released back to the wild.  But because they are an educational facility as well, they are allowed to keep some “lifers”.  These are animals that are still damaged and would never survive in the wild.  Athena is a Goshawk with half a wing.  There is a Barred Owl that was hit by a car and his skull was crushed, leaving him with only one eye, not to mention a little goofy.  Some of the animals were rescued from stupid humans and are “lifers” because they have never been in the wild.

It was such a unique experience to be so close to some of these animals and it was inspiring to meet the people who dedicate their lives to saving, rehabilitating and giving a home to these amazing creatures.

Athena is a “lifer”. She’s missing half a wing.

This is a Utah, a Great Horned Owl.

A Barn Owl. He and his mate just hatched eggs so he has been kicked out of the nest.

It was such a treat to see these owls up close. There are a lot of these around our cabin. I know exactly what they sound like but I’ve never seen one. The one in the middle was hit by a car and is now a “lifer”.

The Adirondack Wildlife Refuge is open from 10 am – 4 pm Thursday to Sunday.  Admission is free but they rely on donations so bring cash.  I will definitely be back because this spring, they are building a bear enclosure!!

One thought on “Adirondack Wildlife Refuge”

Leave a Reply to Heidi A Cancel reply