Tales from Other Travellers

They said it would be hot.

They also said drink lots of water and reapply sunscreen religiously (no pun intended). And I’m still burnt (I’m a redhead so this isn’t surprising, I suppose) and dehydrated. The sweat rolls off in a parade of droplets and the sun is more powerful than I’ve ever felt before. Clothes wrap themselves around you and don’t let go. And that’s at 8 am. There aren’t as many trees as in Canada nor are they as big but they are around and when you find a snippet of shade, the breeze comes with it and it is considerably cooler. There is very little humidity which is a blessing.

Our first stop this morning was the Western Wall. The portion of the Western Wall that is visible is only a fraction of the entirety. The majority of the Wall is underground and we were given a tour of it on Tuesday.  The entrance to the tunnels is in the Western Wall Plaza.  There are tours given in Hebrew and in English every day and in August, tours are also given in French.  Our guide was an American who decided to spend a couple of years in Israel to learn more about his history.  He was not the only American we met doing volunteer work in Jerusalem.

The tour started with some history and an explanation of a scale model of the Temple to orient ourselves.  Then we walked.  Generally the Western Wall was exposed on our right hand side – massive white stones that were almost the same height as I was.  I couldn’t even begin to imagine how they were moved.  On the left, there was often more excavation happening.  Some parts of the tunnels were very narrow, allowing us to walk only in single file.  Other portions were wider.  In one part of the tunnel, we walked over a glass floor and looked down at several stories of excavation beneath us.  Incredible.

(Apologies for the poor quality of photos.  This was 2009, with a simple point and shoot camera and I had almost no understanding of photography at the time.) 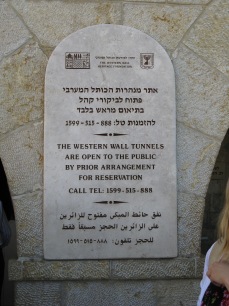 The entrance to the Western Wall Tunnels. The majority of the wall is underground now and in 2009 excavations were still happening. 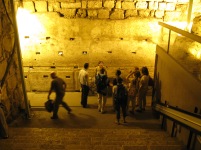 Tours are available in English and Hebrew, and in August there are also tours given in French. Our guide was American.

The tunnels take you through the excavation. On our right, the Western Wall is exposed. On our left, excavation. I wonder what this looks like now.

In this small alcove, the faithful pray near the Wall that is believed to be the the closest possible to the last location of the Ark of the Covenant. 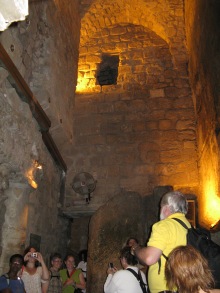 Some spots are wider than others. 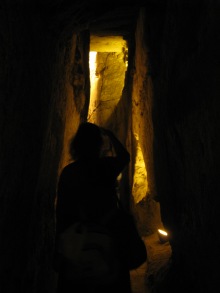 Some spots are more narrow and darker than others. Claustrophobics, beware.

The part of the Western Wall that is outside and exposed is also known as the Wailing Wall. Jewish people revere this wall because it is the closest they can get to where the Ark of the Covenant was once situated behind the wall in the temple. People write their prayers on pieces of paper and stick them in the cracks between the mighty stones so that they can be sent up to Heaven. There were so many prayers that the ones before looked like gum stuck too deeply within the crevices to retrieve or even recognize.

Being close to the Wall was a powerful experience. The energy is palpable. It is segregated so the men in our group went onto the men’s side and we went to a considerably smaller area. Some of the Jewish women were seated along the edges of the path, many were seated within a few feet of the wall, prayer books in hand, rocking back and forth to help focus them on the words that they were praying. There were several closest to the Wall, leaning on the Wall as if the prayer they placed in the cracks were their last hope. Some were even crying, it seemed from the pure emotion of being so close to their beloved Ark. Some had their heads covered with kerchiefs and were clad in old world dresses in somber colours.

Saying a prayer at the Western Wall.

Prayers on paper are stuck in the crevices in the hopes they be carried up to Heaven.

The ladies walk backwards out of the Wall. We saw other tourists turning and walking out but we were given strict instructions to follow the tradition.

Spot the tourists. The men of our group look a little out of place. 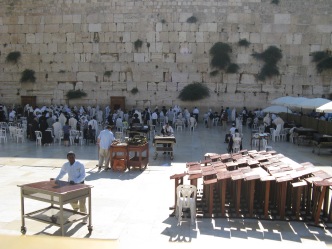 The Wall is massive.

There was a Bar Mitzvah happening on the other side which means that the mothers of the boys making their Bar Mitzvah had to come to the women’s side, stand on chairs and look over the wall to witness it. When we realized this, there was a great deal of consternation in our group. So we stood up on the chairs to look over. The men’s side was three times the size and it had a much more social air to it. Of course, there was much praying-reciting and wall-leaning happening on the other side as well but back beyond that, there were small groups of men chatting, congratulating the new adults in the community and just sitting and relaxing. Then as we were about to leave, we were told we had to walk out backwards so that we never put our backs to the Wall. Just the women. The men can walk out forwards.

There was a general feeling of insult and frustration at the different expectations for the two genders which brought up a lot of heated discussion. But that’s par for the course here.  There has not been a topic in the city yet that has not provoked an emotional response and lively debate.  It seems that debate in this divided and dynamic city is a treasured pastime.

In the afternoon we headed to the Tunnel of Hezekiah. I can hardly explain the Tunnel Hezekiah without going into the politics of the area (just like I said, you can’t spit here in this city without having a heated analysis of whose land you spit on and who was there first and who lives there now and who owes who what). The issue is that the Tunnel of Hezekiah dates back to Hezekiah, King of Judah’s time when he built a water tunnel to divert water into the City of David. But it was only recently discovered under Muslim homes. Enough said.

The Tunnels are open to the brave and non-claustrophobic.  Actually, there are three routes open but the most interesting is the “wet” route – underground, walking through the tunnel that still has water running through it.  There is a poster at the beginning with an illustration of the deepest water so you can prepare yourself for how wet you’ll get.  One of our group started down the metal stairs into the dark tunnel, quickly decided that she would not enjoy it and turned around to head back up to the open air.

We wore water shoes, board shorts and brought headlamps (or flashlights) and followed the water way for forty minutes underground. It was exhilarating!  The water was refreshingly cool and apart from a short distance at the beginning that was about 2′ deep, it was generally below my knees. There was no light save for the light we brought with us. The walls were sometimes narrow, brushing both my shoulders at times and crunching my water bottle in my pack. The roof of the tunnel was so low at times I had to duck and at others, it towered metres above us. I admit that for the first few minutes of narrowness and deepness, I felt a touch of claustrophobia. But it soon dissipated with the soft melody of song coming from some of my colleagues behind me, which echoed off the walls. I ran my hands along the dripping walls as we called out to each other, “Watch your head,” or “Step down.” We reached the end and came out into what looked like a deserted staircase.  This was the Pool of Siloam. There was reconstruction happening so I’m assuming that the reason it looked a little desolate was because they were still excavating.

(I guess I didn’t bring my camera to this attraction because I had to borrow these photos from my friend Tracy, the lady in the middle of the first photo.)

Hezekiah’s Tunnel was very narrow in spots. And in total darkness other than our flashlights, headlamps and the flashes of our cameras.

The Pool of Siloam. This is where the tunnel ended.

It was a one kilometer walk uphill to get back to the Old City.  In the broiling sun.  It was beautifully cool and refreshing in the caves but within minutes of exiting, I was soaked with sweat again. And by the time we got back to Ecce Homo, the hotel that we were staying in, I was burned across the back of my neck and my face. And I was thirsty. My water bottle could not hold enough water. I carry three bottles with me every day and I finish them all before the walk home.

We reached the Old City and Tracy and I stopped at a juice vendor. We bought a glass each of freshly squeezed orange juice to refresh ourselves and then marched on, trying to evade the vendors and their invitations to come into their shops, “Not to buy, just look!” We reached Ecce Homo, plodded up the stairs and I peeled every sopping rag off of me and jumped into a cool shower to keep from melting into a big puddle of goo.

2 thoughts on “The Western Wall and Hezekiah’s Tunnels”

There is a lot of happiness around you embrace it!

WITH CHRONIC PAIN AND PTSD

For the Love of Restoration

Life on the Bike

stories of trekking and travel

Sean Andreotta
ADVENTURESS ON THE RUN
The Unpacker.

Unpacker [noun]: a person who travels beyond the ordinary and expected.

Learning to do for yourself, saves you money and lets you live your dream

Homesteading, preps, restaurant reviews, survival and ramblings from a City guy now in Lanark County. Yep, it's gonna get weird.

Life is all about ups and downs. This is about mountains.

We've made a huge mistake

Join Us as We Blunder Our Way around the World