What a mouthful.  But part of the Golden Circle was our next sightseeing destination after Reykjavik.

We picked up a very small, standard transmission Toyota Yaris that had definitely seen better days from SADcars.  (Very fitting name, if you ask me.  But more on that in a different post.)  We made some quicks stops – at a Bonus to pick up camping groceries and the wine and beer store (Vin Buð , which I believe sounds something like Wine Booth) and finally to the campsite to pack all our gear into our tiny hatchback.

We left the city around noon and headed northeast to drive the north part of the Golden Circle.  The Golden Circle is a tourist circuit that has many beautiful sights on it.  Well, there’s a beautiful sight around every bend in Iceland no matter where you are but this one is easily done as a day trip from Reykjavik and it has some pretty unique sights on it.  We decided to head the two hours to the farthest sight, Gullfoss, first and work our way back to Thingvellir National Park to camp for the night, passing Geysir (the geysir that all other geysers are named after) and Strokkur along the way.

We had been warned about certain things when driving in Iceland – gravel roads, blind rises, single-lane bridges and roaming sheep, to name a few – but we were not expecting this…

Always a good idea to watch out for horses too.

Gullfoss (which means Golden Falls) is the largest waterfall in Europe at 32 m deep. And it is pretty impressive.  It is stunning in its breadth and beauty.  But it is packed with tourists.  I know I am a tourist myself but being in a herd of tourists really takes away from any experience.  We were constantly jostling for space and dodging other people’s photos which makes it a little more difficult to really appreciate the incredible beauty and history of this massive waterfall.  When you look at photos online, they don’t seem to have all the people in them and that is because there are vantage points from which you can take a photo with hardly any people in it.  But be forewarned.  It is usually packed with tourists.

The lower part of Gullfoss. 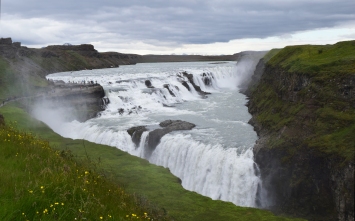 Gullfoss in all its glory.

This waterfall was owned by Sigríður Tómasdóttir at one time and deeply loved.  Actually, it was on her father’s land.  And he rented it out to investors who wanted to harness its power for hydroelectricity.  Of course, this would have changed it forever so Sigriður threatened to throw herself into it in protest.  Fortunately, she didn’t need to because the lease expired and the deal never went through.  One source also says that she marched barefoot to Reykjavik to make her point.  It’s now owned by the government of Iceland and has been a designated nature preserve since 1979.

There is also a legend that a boy who lived on one side of the Hvítá river was in love with a girl on the other side.  One day, he decided to try fording the river, above the falls, so they could elope.  Nobody knows how he did it because the current is fast and strong but apparently he did and they got married and had lots of children.  Awww!

This is a free site, by the way, so don’t feel that just because you get herded through the gift shop that you have to pay something.  Although I will say that we saw some lovely souvenirs here that ended up being cheaper than what we found later on in the Westfjords.  Oh!  And always keep some coins in your pocket because sometimes you need to pay to use the toilets.

After a short time, we headed out towards Geysir and Strokkur, two geothermal geysers.  Geysir used to shoot hot – really hot – water about 80 m into the air until some stupid tourists clogged it by throwing rocks into in the hopes of setting it off.  (I realize I seem really anti-tourist in some posts but I just get so frustrated with the stupidity of people sometimes.  Have a little respect for the places you’re visiting and try not to ruin it for generations to come.)  But right beside it, (literally, they have the same parking lot across from the big “Geysir Centre”) is Strokur.  Strokkur is smaller but much more reliable.

As you walk around the also free site, you’ll see steaming pools with milky water and signs warning people not to touch the water as it’s 100°C coming out of the Earth.  There are also signs telling people not to throw objects into the pools.  D-uh.

Because this is a physical phenomenon determined by hot and cold temperatures and pressure, etc., there is a telltale sign of a bubble happening before Strokkur blows.  But other than that, you don’t know when exactly it will happen.  You can wait anywhere from 2-10 minutes to see one.

We waited for what felt like forever (but was really only ten minutes) for the above to happen and then two others happened within the following three minutes.  There’s really nothing to it; it’s just water spouting out of the Earth but it’s so much fun to watch!  I found myself telling Bob, “K, just one more time!”

It was around 6 pm at this point and we decided to head back to Þingvellir National Park so we could set up our tent, cook dinner and just relax.

There is camping in Thingvellir National Park but it’s not included in the Camping Card.  When we were paying at the Tourist Information Office (it is on the main route of the Golden Circle, Rd 36) and we mentioned that we were snorkelling the next morning is Dive.is, the gentleman recommended camping at a campsite closer to the lake and to the snorkelling and diving site.

We drove down a quiet little road for about fifteen minutes and just happened to see the Dive.Is van pulling out of another road.  Now we knew exactly where we needed to go!  But to get to the campsite, we continued another five minutes and turned off another, even smaller road, which ended at a small parking lot occupied with a few other campers and several fisherman.  As with most campsites, there was a small sink area (one for dishes, one for fish), toilets and a ranger’s office.

We found a flat spot that wasn’t too close to the other tents and wasn’t too far away from the car and set ourselves up.  It was very interesting to see so many men coming to fish for trout at 9, 10, even 11 pm in their chest high, insulated waders.  They would wade out quite far into the shallow water and came out with plaice, arctic char or trout. 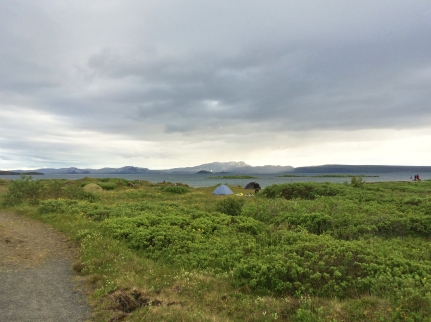 Our little grey tent sits in Thingvellir National Park. There were only five tents in this area on this night.

An arctic tern carries a butterfish to her chicks, most likely hidden in the bushes somewhere relatively closeby.

As we sat outside our tent having breakfast, we had some visitors.

And a few minutes later, we had some more guests, even closer.

Þinvellir is famous as it was the location of the world’s first parliament (the Alþing) in 930 CE. It is a National Park and a UNESCO World Heritage Site.  It is also in a rift valley caused by the separating North American and Eurasian tectonic plates.  This park is historically significant and there are a few old buildings to see, as well as where the Alþing took place  and many, many walking trails that I’m sure would be incredibly stunning.  We were here to snorkel the next morning so we would not be seeing much else in the park, other than the Silfra fissure underwater.  When we come back to Iceland, I would love to take a day to see more of what the park has to offer.  As it was, I couldn’t have asked for a more beautiful spot to spend the evening.

The next morning we were meeting up with Dive.is so we could go snorkelling between two tectonic plates.  Again, you can book this adventure from Reykjavik as they do hotel pickup.  The experience was incredible!  First of all, we spent a chunk of time learning how to put on the dry suit and learning about the fissure and the glacial water that we would be swimming in.  We learned where we would be going, how to handle uncomfortable situations and that it would be around 30 minutes in the water.  Then we spent another chunk of time getting into the dry suit, then walking to the dive point, then waiting for everyone in front of us to go far enough ahead that we would have our own space.  Then we were able to finally get in the water.  We took a few moments to adjust to the cold water and then we submerged ourselves and floated on the current through stunning underwater scenery.  The colours were so vibrant!  The water was so clear!  There was one point that the water was very shallow and we were told to be very careful not to touch the silty bottom or else we would lose 150 m of visibility.  (The vintage feel to the video is because of the swarms of small bugs that were annoying is.  They don’t bite but they love getting in your eyes,nose and mouth.  I think I swallowed a few!)

We emerged from the water about 30 minutes later and stripped out of the gear that took so long to get into.  We were both exhilarated from the experience.  We had started our day in glacial waters, snorkelling between the Eurasian and North American tectonic plates.

The rest of our day was going to be spent driving.  We settled into Elfis (named after the elf that teaches foreigners how to drive in Iceland) and headed west.