The day before in Ólasfvík, we had stopped at the tourist information office and discovered that the ferry we had hoped to take from the small town of Sktykkishólmur across the Breiðafjörður to the Westfjörds was completely sold out.  We were told later that the ferry gets fully booked well in advance.  So if you are hoping to take this ferry – which cuts off several hours of driving to get to the Westfjords – then book ahead of time!

But we still really wanted to go to Stykkishómur because it was the scene in The Secret Life of Walter Mitty in which Walter Mitty decides to join the drunken pilot to fly offshore to the ship on which he believes he will find Sean O’Connell, while his crush Cheryl Melhoff sings David Bowie’s Space Oddity to him in a karaoke daydream.  Yeah, I know.  Awesome.

So we headed out early the next morning in a cold drizzle, the first less-than-perfect weather we’d had so far.  We bought coffee at the gas station and it was the BEST. COFFEE. EVER.  Oh, how exciting not to have to sit around a small propane stove in the misty rain for an eternity while heating water to dissolve instant Starbucks coffee crystals in the plastic camping mugs that had wine in them the night before.

We settled into driving and after only 15 minutes, we came across this scene:

We decided to pull over and have some Cheerios in our camping mugs and hope that the rain would pass.  (Don’t worry, we had rinsed last night’s wine out of them.)

In Iceland, if you don’t like the weather, wait five minutes and it will change.  And so it did.  The rain stopped.

We decided to take a short walk to the bridge atop the waterfall to stretch our legs and enjoy the view. 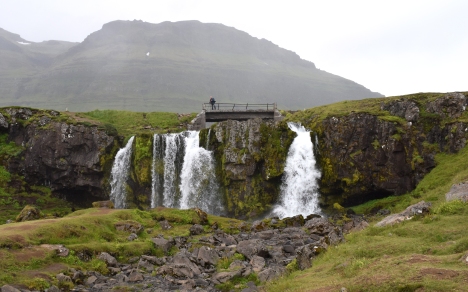 The bridge was in pretty bad shape. Behind us was Kirkjufell mountain.

Little did we know that the mountain in the second photo, Kirkjufell, is very loved and one of the most widely-photographed mountains in Iceland.  I can see why.  It is very imposing and unusual in its conical shape.  Most of the mountains in this area have flatter tops.  I wondered if there was a trail you could hike to the top and apparently there is.  I wouldn’t risk it without a guide though!

Another ten minutes driving brought us to Stykkishólmur.  We really didn’t know how we were going to find the location of what we called the Walter Mitty bar so we just followed the car in front of us to the harbour.  We parked, looked around and immediately found the identifiable triangular stone monument by the harbour.  This happens quite often in Iceland.  You don’t really need to know where something is precisely because there really aren’t that many people or buildings except in Reykjavik so just wander around and you’ll find whatever it is you’re looking for.

We did a quick scan of the harbour, noting the colour of buildings and locations.  We watched the video clip a couple of times and deduced that the Walter Mitty bar is actually a book store.  And if you can believe it, I actually didn’t get a photo of it.  (WHAAAAT????)  In the header photo, you might notice a small two-storey yellow building beside a two-storey cream coloured building.  The yellow building is the Walter Mitty bar.

We arrived at around 11 am and many shops were closed (except for the souvenir shop).  In fact, the town looked pretty quiet except for the tourists.  There was a cute restaurant by the harbour called Sjávarpakkhúsið that didn’t open until noon so we decided to walk around the town, see what there was to see, then come back to the harbour for lunch and then head out.

We looked through the souvenir shop.  There was a little museum of antique items that cost 1000 ISK (around $10) to enter so we didn’t.  We went to check out a strange-looking church; it is yet another great example at how unorthodox Icelandic architecture is.  With the plain white walls, the painting of Mary and baby Jesus floating in what looks like a night sky and hundreds of light bulbs hanging from the ceiling, I would imagine that the interior of Stykkishólmurskirkja would be almost heavenly at night.

Most churches in Iceland are Lutheran.

We decided to take a shortcut to the church along a path that had a very steep ending.

An austere interior, a floating Mary and Jesus and hundreds of suspended light bulbs.

Since nothing in Iceland is all that far, even after we had walked to the edge of the town to see this church, looked inside and walked back, it had only taken us 30 minutes.  With still half an hour to spend before the restaurant opened, we decided to walk up to the top of the basalt island of Súgandisey.  There was a sign that warned of difficult terrain but it was mostly stairs and the path was well worn so I’m not sure which part was considered difficult.  Though it looks rather large and far away, it only took us a few minutes to get to the top. The view of the town (header photo) and the view across the Breiðafjörður was beautiful.  (It’s getting a little repetitive, isn’t it?  Every view here is beautiful.)

After we explored the island (all of ten minutes), we headed back to the harbour.  Sjávarpakkhúsið, the restaurant we had found when we first arrived, had just opened and we were both quite hungry by this time.

I ordered the seafood soup and Bob ordered the scallops.  There was a lovely spice to the soup and it warmed me up from the inside. 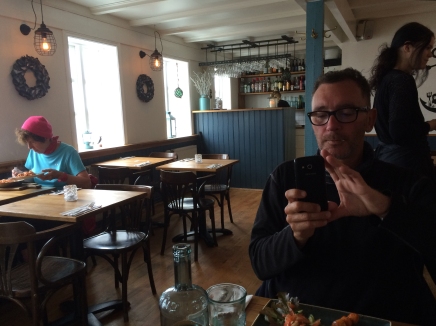 A cute little restaurant that served fresh, right-off-the-fishing-boat food that was delicious.

Not sure how the bread tasted since I’m allergic to it. But the soup was wonderful!

The little restaurant that we wanted to eat lunch at when it opened.

Our lunch was finished and we had seen all there was to see so we got settled into the car again and headed east (to go west) towards the Westfjords.

It was a lot of driving.   We took a lot of photos from the car window.  Here are some of the different landscapes we passed in the next hour and a bit. 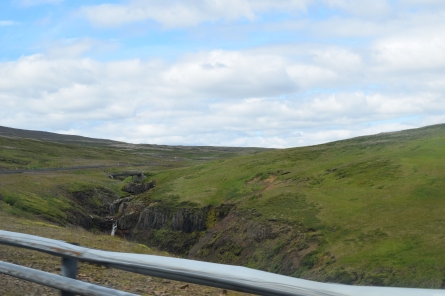 Eventually, we came across a blue tourist flag with the handicraft symbol on it (it looks like a knit flower, reminiscent of fair isle design).  We decided to stop for a break here and check out what they had to offer.  If there was a name for this shop, we never found out what it was.  It just had a hand painted sign over the door that read Handverk Handcrafts.  It was also a café.  And a museum.  And a used book store.  And a tourist information kiosk.  And it sold every kind of hand knit anything you could possibly want – hats, socks, mittens, sweaters, scarves, shawls, hot water bottle cozies and even things I had no idea what they were.  Looking at a map, it was just north of the bridge somewhere near Króksfjarðarnes. 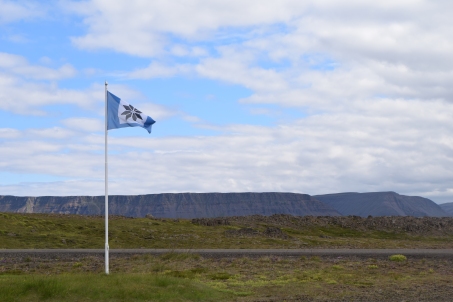 When you see this symbol, there are handicrafts nearby.

It really doesn’t look like much. We actually didn’t even know if it was a shop.

Coffee and a new woolly hat.

Like most shops in Iceland, we were learning, this shop was a bit of everything.

Standing outside the shop, this was the view. The road we will travel can be seen in the distance on the right.

We had some coffee, I bought a woolly hat (“cheapest prices in Iceland!” and they were from what we saw), and we clarified how much farther we had to go to get to our projected destination of the Flókalundur campsite (138 km, which we naively predicted would take us around 1.5-2 hours to drive.)

And off we went again.

And then this happened.  On a paved road no less! 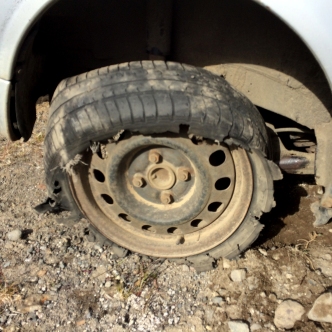 At least we had a view.

It was 5 pm at this point.  It had taken us an hour and a half to go approximately 100 km. Flókalundur was still another 40 km away.  We had no cell reception and no way of knowing where the next garage would be.  There was only one thing to do so Bob put the spare on and away we went – even more slowly.

We arrived at Flókalundur a bundle of nerves to a campground that was almost packed. We found a small strip of grass and set up camp.  Bob went to the hotel to register us and to ask where the closest garage was so we could get a new tire.  He said maybe in the next town, 16 km away – Brjánslækur, where the Stykkishólmur ferry comes in – or maybe Patreksfjörður, 60 km away.

We made a one-pot wondermeal and felt the tension fade from our shoulders as we considered ourselves to have one of the best views in the campground.

There’s not much to say, really, about Flókalundur.  It was named after the Viking explorer that gave Iceland its name.  The Lonely Planet says it’s a village but we didn’t see anything except the hotel and the campsite directly behind it.  It is a great camping location if you are interested in hiking or bird-watching in the Vatnsfjörður Nature Reserve.

It also has a hot spring.  There’s a small trail that heads down the hill away from the campground, about 500 m and then eventually crosses the highway.  Follow the trail markers a few more metres, go down a few steps and voilà!  A hot spring!  We decided that the next day, before we went on the search for a garage to get a new tire, we would start our day in the right frame of mind and go for a soak in the hot spring.

Follow the symbol of a body in hot water. Hot spring ahead! 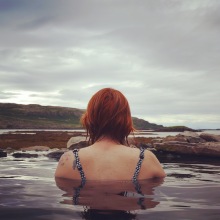 What a great way to start the day.

This day wasn’t the most exciting day we’d had so far but it still makes for a good story!  It is a perfect example of the fun and memorable things that can happen if you are open to them and that you can find beauty and adventure all along the journey, not just at the destination.

Next up:  Patreksfjörður and Þingeryi

One thought on “Stykkishólmur and Flókalundur”