July 5th, 2009. Jerusalem. 3:30 am. I am startled awake by the piercing call to prayer emanating from the minaret just beyond the terrace of our accommodation. Our group of 23 is staying at Ecce Homo, a convent that is home to the Sisters of Zion in the Muslim Quarter of the Old City. It is also Station no. 2 on the Via Dolorosa (the Way of the Cross).

The haunting song to Allah is broadcast five times a day. Muslims stop what they are doing, or awake from sleep, to devote time and thanks to Allah. As I lay in bed imagining what wonders the words spoke of, I was humbled by this idea of keeping God at the forefront of one’s life at all times. It was chanted beautifully and it could have lulled me to sleep again had it not been quite so loud.

A call to prayer. Those words are interesting. Is this journey my call to prayer? Why did I come here? What did I hope to achieve, other than an opportunity to travel to a faraway and mysterious country? Why do I suddenly feel that I will find here what I didn’t even know I was missing? There was a reason I came to this ancient city of David. I had to come. There was something deep inside me that yearned to see this holy place. So this trip could be my call to prayer. My call towards a deeper understanding of something that lies within me as of yet unnamed.

That’s what was going through my mind that first early morning in the Holy Land. We arrived in Jerusalem around 8:30 at night on July 5th after an 11-hour overnight flight and a 45-minute wait for luggage in Tel Aviv and then another one-hour bus ride to Jerusalem with a short dinner stop thrown in. It was dark by the time we passed through Herod’s Gate into the Old City and walked the remaining way on foot to the pilgrim house.

We were given our keys and led up to the 2nd floor terrace.  The view that awaited us was the same sight that has greeted pilgrims for hundreds and hundreds of years. The small lights and lanterns from windows and streets sparkled like earthly stars all around us through the medieval haze. The towering minaret stood directly before us bathed in soft light from the full moon. Beyond it, just to the left stood the golden Dome of the Rock, the third most revered site in Islam. Just to the right of it were the lights of the Wailing Wall, the holiest place for the Jewish faith. Further to the right still, the cross atop the Church of the Holy Sepulchre marks the site of Christ’s crucifixion and resurrection. Within these high stone walls of the Old City, the most devout pilgrims of the three major world religions crowd to the places that their faiths holds dearest.

Jerusalem – Yerushalayim – holds many of our imaginations in its grip. It is the setting of stories that many of us have heard since the cradle and the birthplace of the values that have shaped our thoughts and actions. There is no denying the power that the Holy Land has over the vast majority of the world, whether we grew up with a particular religious tradition or not. It is a place of mystery, drama, and myth, so far removed from my reality as a Canadian that I did not really know what to expect. I expected it to be hot. And I expected it to be coloured in hues of gold, ochre and Mediterranean blue. But no matter how many stories I heard from my Jewish friends and the course coordinator, it could never prepare me for the change my soul would experience within my time there.

Jerusalem is a city that is lovingly and most seriously called The Centre of the Universe. And how could it be anything but when the vast majority of the world’s population believe that this part of the world – specifically the city of Jerusalem – was where everything that created our faiths first happened. It was here that Abraham sacrificed Isaac. It was here that David danced through the gates leading the Holy Ark of the Covenant. It was here that Mohammed ascended into Heaven. It was here that Jesus was tried, crucified and buried. It was here that he rose again. If I had been agnostic before, feeling the power of this place made me question myself. Quite simply, how could so many people be wrong?

Pilgrims walk the Way of the Cross.

The minaret just outside the terrace of Ecce Homo.

The Dome of the Rock.

Ultra-orthodox Jews walking toward the Mount of Olives.

During the first few days, I felt no differently than I would traveling anywhere else in the world. In retrospect, I think I was just so exhausted – what with the time change and the regular 3:30 am call to prayer and the relentless schedule – I was just trying to stay upright. But as I became accustomed to life in the Holy City, the wonder and awe began to take hold.

The walls of the Old City held innumerable treasures within them. The spice stalls, the cobblestone streets, the hollering shopkeepers.  It is a place that is vibrant and intense, loud and haphazard yet modest and deeply reverential.  Shorts or bare shoulders are not acceptable in many sites and women don’t go anywhere without a headscarf to drape over their heads should they pass by a holy site.  The area within the walls in not large and is split into four quarters – the Muslim quarter, the Jewish quarter, the Christian quarter and the small Armenian quarter, all with their own flavour, shops, language, faith and followers.  The streets are bustling with pedestrians as private vehicles are not allowed in the Old City.  (But you will see UN and military vehicles.)  It is a maze of streets that drastically changes appearance as the sun sets and the colourful wares are pulled inside and the shop facades close.

Streets of the Old City during the day. 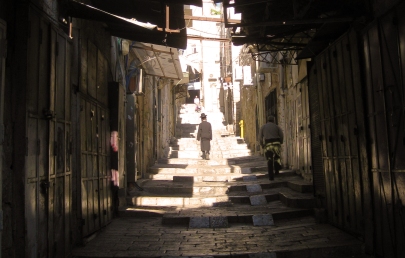 Streets of the Old City in the early morning.

In our seven days there, we were constantly on the move throughout the Old City, the rest of the city and the sites a short bus ride away.  Some complained about the pace but there was nothing that we were willing to take out of the itinerary so we mentally and emotionally processed what we were being exposed to at an accelerated rate.  We visited places that were the settings of some of the oldest stories in our history.  The Western Wall, Hezekiah’s tunnels, the Dome of the Rock, Bethlehem, the Garden of Gethsemane, Calvary, Ein Karem (where Elizabeth and Zechariah lived), King David’s tomb, Temple Mount, the Way of the Cross… the list goes on.  By the time we boarded the bus to head north to the Galilee, saying our goodbyes to Jerusalem at the end of seven days, I felt in my heart that I was leaving something special.

It is a place where tolerance for each religion only slightly outweighs the tension between them.  Young Israeli soldiers with automatic rifles ensured safe passage through the Muslim Quarter streets as the ultra-orthodox Jews walked to the Wailing Wall to welcome the Shabbat.  One church (the Church of the Holy Sepulchre) is controlled by at least 6 different denominations of Christianity (Roman Catholic, Greek Orthodox, Armenian Orthodox, Egyptian Copts, Syriacs and Ethiopians).  The third most revered place in Islam (the Dome of the Rock) was built on top of the most revered place in Judaism (the resting place of the Ark).  A slim minority of Christian Arabs have shops filled with olive wood and mother-of-pearl nativity scenes.  And these are just a few examples of how the religious groups interact.  When you throw in the political issues such as citizenship, housing rights, the West Bank, the green line and general history, the balance of peace becomes increasingly precarious.

Buying sweets from a street vendor.

The spice stalls were always a masterpiece of aromas.

Olive wood souvenirs being sold in an Arab Christian co-op.

The souk during the day. 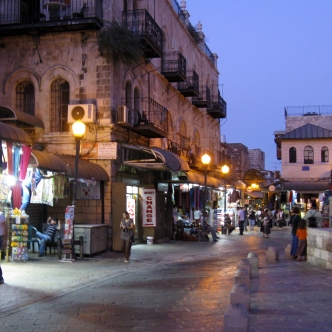 The Old City at night.

The Holy Land didn’t give me more faith.  It didn’t spark Jerusalem syndrome in me, causing me to roam the streets, spouting prophecy in tongues. (It’s a real condition; look it up.)  It didn’t answer any of my questions; in fact, it sparked more.  But it did give me the context to understand what was being said to me in those ancient stories.  Visiting these locations was the puzzle piece that turns the picture from a jumble of colours and lines into an identifiable idea.

In every stone and down every alley, we were faced with the gravity of possibility.  It’s not that the places that we visited could be archaeologically proven to be, if not the very path taken by Jesus, at least the only plausible option that made me stop and ponder the magnitude of it all.  In fact, we had already discovered that many of the places that are traditionally held as sacred (the room of the Last Supper and the tomb of Christ, for example) were created several centuries after Jesus’s death.  What I discovered was that it was not about whether it really happened in that place or not.  More importantly, it was the power of the spirit held within those places.  The power held within all of us as a group of believers. The spiritual power that we brought with us that truly demonstrated our faith.  I felt that no matter which faith we had each grown up with or embraced, in this city, we were all People of the Book.

“How is Jerusalem?” you ask.  It is political and radical, unbelievable and astonishing. It is edifying and empowering, enlightening and unlike anywhere else I have ever travelled.  It is its own entity.  It is, indeed, the Centre of the Universe.

2 thoughts on “The Old City, Jerusalem”